To Spooners Lane & Beyond

Liam McManus has kindly given us permission to publish his centenary book online, "To Spooners Lane & Beyond" charts the fascinating history of the club from 1887 - 1987.

The book is available below at the following links

One of the most treasured items of history that we have in the club is the original minute book from the first 2 years of the club. Liam has painstakingly transcribed the minutes of those meetings which paint a colourful history of the founding of the club.

The minutes have now been scanned online and are available here: 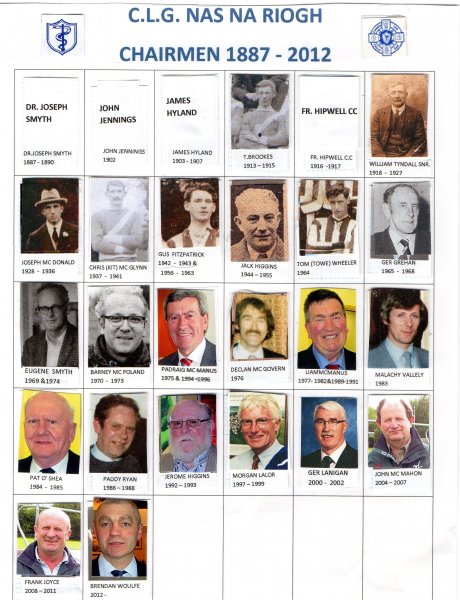 John Mc Mahon has been elected the new Chairman of Kildare GAA County Board.

Kildare County Board Chairpersons from Naas:

In a two man race for the chair John defeated Athy's Eddie Lawlor in the vote held at the specially convened EGM held in Hawkfield today.

It is a great honour for Naas GAA to see our former club chairman elected to the post of Chairman of Kildare County Board and club officers, executive and members wish him all the best.